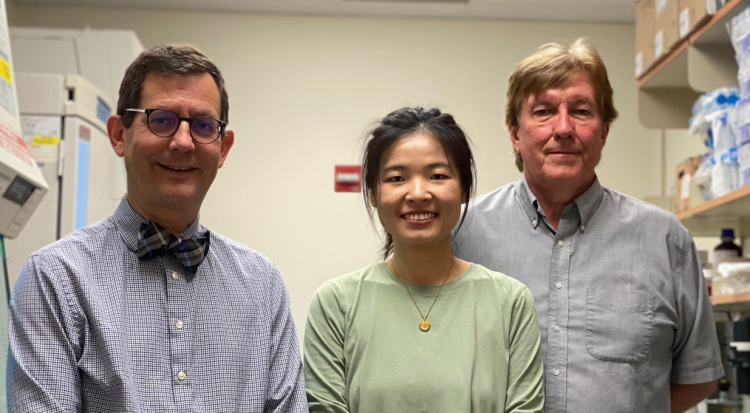 A team co-led by Vincent Cryns, MD, professor and chief, Endocrinology and Diabetes, and Richard A. Anderson, PhD, professor, University of Wisconsin School of Medicine and Public Health Molecular and Cellular Pharmacology Training Program, has found that two of the most common genetic changes that cause cells to become cancerous, which were previously thought to be separate and regulated by different cellular signals, are working in concert.

To date, researchers have focused on finding drugs that block one or the other to treat cancer. Understanding their cooperative effects may lead to more effective treatments.

Cells muster a protein, called p53, which acts inside the cell nucleus to respond to stress, but mutations of the gene that produces p53 are the most frequent genetic abnormalities in cancer. Mutations activating a cellular pathway called PI3K/Akt, located on the surface of cells, are also often implicated in runaway cell growth in cancer.

The team discovered a direct link between the p53 and PI3K/Akt pathways. The findings, published in the journal Nature Cell Biology, identified links in the pathways that make promising targets for new cancer treatments. 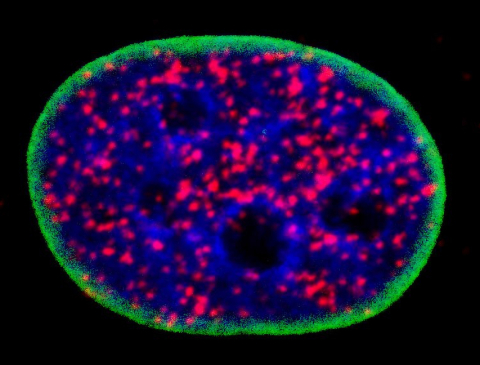 Above, outlined in green, this nucleus of a cancerous cell contains DNA in blue and red blobs marking the cell’s p53 protein binding with parts of the Akt cellular signaling pathway, a partnership that will prevent the cancerous cell from dying as it should and instead prolong its life and lead it to divide into more cancer cells. (Photo credit: Mo Chen)

Adapted from an article by Chris Barncard, University Communications