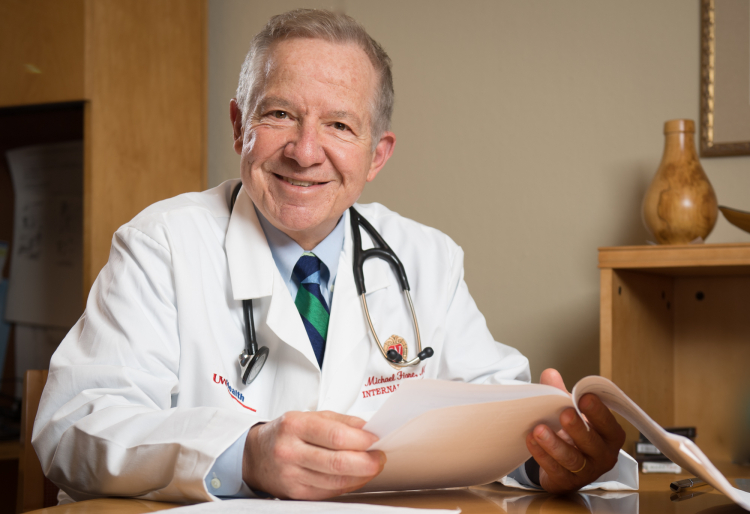 Visiting the doctor as a child in Boston brings up a distinct memory for Michael Fiore, MD, MPH, MBA, professor, General Internal Medicine and director of the UW Center for Tobacco Research and Intervention (UW-CTRI).

"He would smoke while he was examining my siblings and I, dropping ashes on us while he worked," he said.

While the idea of a physician smoking during a patient exam might seem shocking in 2018, it reflected an era in which the tobacco industry went so far as to court doctors for testimonials, as shown in a 1949 television commercial below. But by the time Dr. Fiore underwent a training stint in preventive medicine with the Epidemic Intelligence Service at the Centers for Disease Control and Prevention, the link between tobacco and poor health was becoming clear.

"I worked side by side with US Surgeon General Dr. C. Everett Koop, and he became a mentor," Dr. Fiore recalled. The experience inspired him to use science to influence public policy in profound ways.

Since that time, Dr. Fiore's efforts have been directed toward a single goal: To eliminate tobacco use from our society.

In a talk delivered at the Department of Medicine Leadership Retreat on February 2, 2018, Dr. Fiore summarized the monumental progress that has been made toward this goal through work conducted at UW-Madison—and articulated how much more remains to be done.

The Early Years: Tackling Tobacco in the 1990s

The history of tobacco research and intervention at the university began with Dr. Fiore's leadership to establish a smoke-free policy for the University of Wisconsin-Madison that went into effect on April 8, 1991, followed by the launch of UW-CTRI nearly a year later on April 1, 1992. The center initiated the UW Smoking Cessation and Research Clinic, which offered tobacco users personalized quit plans that included FDA-approved cessation medications, counseling, and information to help smokers understand the physical and psychological aspects of quitting tobacco.

Early wins for UW-CTRI proved to be game-changers. The center was granted an NIH K award that funded an effort to establish smoking status as a vital sign to be queried during medical visits, and researchers conducted the center's first nicotine patch smoking cessation clinical trial.

As the center grew, so did its impact. Annual research funding awards to UW-CTRI were less than $1M each year through 1996, but under the leadership of Research Director Timothy Baker, PhD, professor emeritus, funding rose sharply starting in 1997. In 2003, the center was awarded more than $7M in funding, a level that has been approximately maintained to date. Since its inception, UW-CTRI has been awarded a total of $137M in funding, which has fueled a steady stream of research findings and outreach efforts.

The research program of UW-CTRI has been notable for its diversity in funding mechanisms, including four successive National Institutes of Health P50 Center Grants, many R01 awards, an R35 NIH Outstanding Investigator award, and translational research funding from the UW Institute for Clinical and Translational Research.

Through 2017, researchers at UW-CTRI have published more than 500 peer-reviewed publications. "We've been busy," said Dr. Fiore.

The ultimate goal of research at the center is to inform real-world practices, and in terms of volume of people reached, the Wisconsin Tobacco Quit Line has been one of the most successful means of affecting lives for the better. Any smoker who calls the toll-free number 1-800-QUIT-NOW is connected with a friendly coach who offers free, confidential, and non-judgmental counseling and a free two-week starter kit of nicotine reduction therapy aids in the form of patches, gum, or lozenges that arrive in the mail. Services are available in nearly any language.

Approximately a quarter-million people have called the Wisconsin Tobacco Quit Line since it began. Of the nearly 10,000 callers per year, nearly 1 in 5 is African American, 31 percent are uninsured, and 25 percent are Medicaid recipients. Each of these groups represent the populations that are currently hardest-hit by tobacco addiction: people living in poverty, many of whom have low levels of formal education, and specific racial and ethnic minorities. The center also has outreach programs specifically aimed at the third group suffering the highest burden of tobacco addiction: people with co-morbid mental health or addictive disorders.

In addition to outreach efforts aimed at smokers, UW-CTRI personnel led by Outreach Director Rob Adsit, MEd, have also launched an "academic detailing" initiative aimed at providing evidence-based resources and tools to clinics and hospitals throughout the state. Since 2001, this program has provided on-site training and technical assistance to 800 hospitals, 20 healthcare systems, and 25,000 clinicians in Wisconsin.

Creating Policies That Support the Vision of a Tobacco-Free World

To enact change on a societal level requires policy work, and once again, the center has been able to coordinate meaningful progress over a time that spans five different US Presidential administrations.

Building on the policy intervention to designate smoking status as a vital sign, UW-CTRI led a Robert Wood Johnson Foundation Initiative to address tobacco in health care. Then, Dr. Fiore was invited to create a national tobacco cessation plan by Tommy Thompson, former Governor of Wisconsin who served as US Secretary of Health and Human Services from 2001 to 2005. A model of the projected effect to the cessation plan, if fully implemented, estimated that smoking rates would drop below 5 percent by 2030. As of 2016, the rate was 15.5 percent.

One of the most memorable moments for the center came in 2005, when Dr. Fiore was asked to be one of the US Justice Department's five expert witnesses in the federal racketeering trial against the tobacco industry. The ruling issued on August 17, 2006 found the tobacco companies to be liable and guilty of racketeering, but the judge ruled that he was constrained in asserting remedies due to an earlier appellate court ruling requiring that all penalties be "forward-looking." The end result was that funding from the settlement for the national cessation plan dropped from $130B to $5B.

Undaunted, Dr. Fiore and colleagues continued to focus on major policy initiatives. In 2010, Dr. Fiore served on a Joint Commission effort to create a new performance measure-set for tobacco cessation. The four performance measures set expectations for healthcare systems regarding tobacco use screening, tobacco use treatment during hospitalization and management after patients are discharged from the hospital.

Most recently, Dr. Fiore and Dr. Baker have advocated a bold new regulatory policy: reducing the nicotine content of cigarettes. "We know that people smoke because of nicotine and die because of the tar. If we can pull the nicotine out, people do not smoke. The FDA now has the authority to lower the nicotine to non-addictive levels," said Dr. Fiore. In July, 2017, the agency indicated willingness to consider this regulatory approach. "If this happens, we have a path to get all Americans off of nicotine."

The vision of that long-awaited tobacco-free world keeps driving the determination of Dr. Fiore, Dr. Baker, and their colleagues at UW-CTRI.

"As a society, in the 1950s we mobilized to address another public health threat, polio. We developed a vaccine and beat it," said Dr. Fiore as he showed a historical photo of healthcare workers administering polio vaccinations to children.

"Little did we know that another public health threat was emerging," he noted—zooming into one of the photos.

The doctor in the 1950s-era image was smoking while he gave an injection to a young boy.