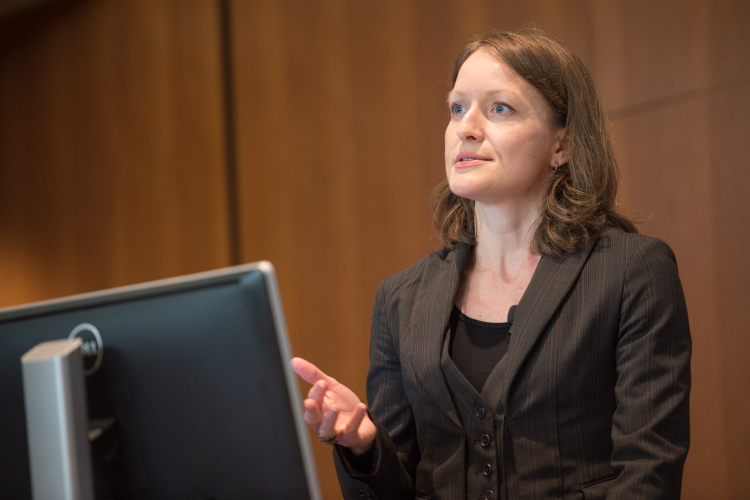 Intervening early in Alzheimer’s disease promotes better outcomes for patient care and public health, but sleuthing out the first signals of this disease in the brain has been difficult. Now, there’s new hope: a research team led by Barbara Bendlin, PhD, associate professor, Geriatrics and Gerontology, has capitalized on a new brain imaging method that detects structural changes in white matter, specifically in myelin.

White matter in the brain is comprised of myelinated axons which wire up the brain to form communication networks. The high-lipid myelin sheath surrounding axons in white matter serves to insulate and accelerate impulse conduction along nerve cells. Research published by Dr. Bendlin and colleagues in JAMA Neurology indicates that myelin damage in white matter occurs before physical symptoms of Alzheimer’s disease. As a result, monitoring the health of white matter myelin could serve as an early warning system.

While changes in myelin content had been known to occur with age, the effect of Alzheimer’s disease pathology on white matter—and especially myelin—was relatively unknown. “There have been promising advances made in using cerebrospinal fluid (CSF) biomarkers such as Aβ42, total tau protein, and a phosphorylated form of tau for early detection of Alzheimer's disease, but we still need better ways to look directly at the brain to understand how and when neurodegeneration begins. With the help of our colleagues in medical physics, we used a specialized MRI technique to determine whether preclinical Alzheimer's disease involves loss of myelin, and indeed, our results suggest that myelin loss is apparent in the earliest stages of the disease,” said Dr. Bendlin.

An accompanying editorial praised the significance and impact of the work. Editorial author Gene Alexander, PhD, University of Arizona, stated, “As the lines become blurred between our understanding of healthy brain aging and the effects of very early incipient pathology of Alzheimer's disease, it has become increasingly important to have the imaging tools to investigate these brain effects to help tease apart the interactive contributions of aging and disease.”

Using a novel MRI technique called Multicomponent Driven Equilibrium SinglePulse Observation of T1 and T2 (mcDESPOT), researchers quantified myelin water fraction as a surrogate measure of myelin content in 71 individuals. The scientists found that age-related loss of myelin is greatest among people with elevated Alzheimer's disease neuropathology, in addition to showing that lower myelin content was strongly linked with CSF concentrations of proteins related to Alzheimer's disease (sAPPβ, Aβ42, Ttau, Ptau181, and their ratios with Aβ42), particularly in brain regions known to be most affected in Alzheimer's disease. This suggests that loss of brain myelin may play a key role in the pre-symptomatic stages of this age-related, neurodegenerative disease.

Future areas of investigation for the research group include monitoring myelin content changes over time, determining the timing of myelin loss in relation to development of amyloid plaques and neurofibrillary tangles, and determining the usefulness of imaging and these CSF biomarkers of connectivity loss for early detection of AD.

Other investigators from the Department of Medicine include Drs. Sanjay Asthana, Cynthia Carlsson, Sterling Johnson and professor emeritus Mark Sager, in addition to Nancy Davenport-Sis, Cristybelle Canda, and Patrick O’Grady. The research was funded by the National Institute on Aging (R01AG037639).