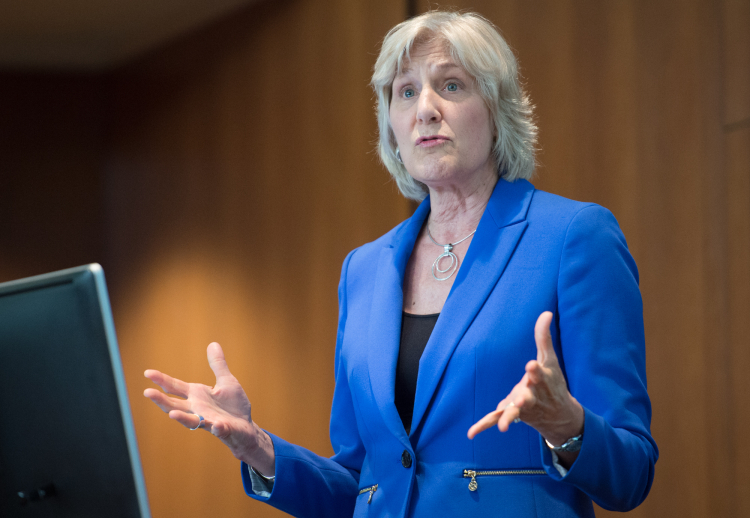 After a truly remarkable career, the Department of Medicine is proud to honor Molly Carnes, MD, MS, professor, Geriatrics and Gerontology, who will retire on April 30, 2022.

Throughout her time with the department, Dr. Carnes has been a champion for women in medicine, science, and engineering. From being the only woman physician with tenure in the department, she has played a major role in achieving its current state with over 25 tenured women faculty. Many of the current leaders in the department were supported by one of the numerous education and career development programs she built. In the success of those supported in these programs and her research on diversifying the scientific and medical workforce, Dr. Carnes’ legacy will continue to impact each trainee, physician and researcher at the Department of Medicine.

During your time in the Department of Medicine, what would you consider your most significant accomplishments?

Wow. That’s a hard one. Being a physician-scientist has enabled me to have multiple careers with the same job title. When I was a geriatric fellow, which was at that time essentially build your own training program, I discovered that I really like building programs – especially those that integrate research, education, and clinical care. Shortly after fellowship, I was part of a team that wrote proposals that continued the geriatrics fellowship, which I directed for 15 years, the geropsychiatry fellowship, and two interdisciplinary geriatric programs that became the foundation for the GRECC (the Geriatric Research, Education, and Clinical Center). I was one of the original authors of the GRECC program, the first Associate GRECC Director for Clinical Activities, and later the acting GRECC director.

When I got tenure in 1990 and found myself the only women physician with tenure in the entire Department of Medicine, I took to heart the recommendations of the newly established NIH Office of Research on Women’s Health that there is a bidirectional synergy between women’s health research and women in academic medicine. The only fellowship in DOM that had women at that time was Geriatrics. It is hard to believe now, but none of the other subspecialty fellowships had any women. I realized that if we were going to ever have women leaders in academic medicine, we had to keep them in the pipeline. I capitalized on leadership by the Department of Veterans Affairs to invest in 8 women’s health fellowships around the country. I successfully competed for that, and then sequentially competed for an NIH T32 to train postdocs and then a K12 for early-career faculty in Women’s Health and Aging – with broad definitions of both women’s health and aging.

Then, when the Medical School (now SMPH) offered the opportunity for any topic to compete to become one of its strategic priorities, I wrote a proposal to make Women’s Health one of these priorities and was successful in becoming one of 6 selected areas, and then also competed for one of the initial Cluster Hiring programs in Biology of Sex and Gender Differences/Women’s Health that recruited three new faculty, all of whom were women. I competed for a National Center of Excellence in Women’s Health and used that to launch the Center for Women’s Health Research. When the NSF issued an RFA for ADVANCE Institutional Transformation programs, I collaborated with Jo Handelsman (currently director of the Wisconsin Institutes for Discovery) and became the only physician ever to be PI of one of these awards. With this NSF funding, we establish the Women in Science and Engineering Leadership Institute (WISELI) in the College of Engineering, which after about 20 years of existence was recognized last year by NIH as one of the interventions that have had a great impact on gender equity in STEMM (science, technology, engineering, mathematics and medicine).

I guess I would say that my most significant accomplishment came from being able to keep so many talented women in the academic pipeline through my training and career development programs because some of our current institutional leaders were at some point supported in one of my programs: Cindy Carlsson, Amy Kind, Nasia Safdar, Christie Bartels, Angela Byars-Winston, Mary Sesto, Meghan Piper, and others. I should add that these programs also supported some men who became leaders in the department including Chris Crnich and David Feldstein.

What have been the most personally gratifying aspects of your work?

Most satisfying has been the independence to do what I have wanted for almost all of my career. I found that as long as I could bring in my own funding, people pretty much let me do what I wanted to do, so I learned to write grants early. I have also loved the opportunities UW-Madison has offered to collaborate with such brilliant and creative faculty and staff across campus. I am grateful to have enjoyed tremendous support for my research from a number of sources at UW-Madison over the years. UW-Madison is really a great place to have a career as a physician-scientist.

What are you looking forward to in retirement?

A number of years ago it was popular to try to sum up your life in 6 words.  For me, I would say “all my dreams have come true.” So, I am just looking forward to appreciating being alive.